As a freelance Camera Operator, Lighting Cameraman and Editor, I collaborate with a wide range of clients who stretch from international broadcasters and corporate companies, right through to start-ups & individuals in their visual story telling. I have extensive experience as a Lighting camera operator, and a rounded understanding of how camera operation and editing go hand-in-hand; I always shoot with the edit in mind. 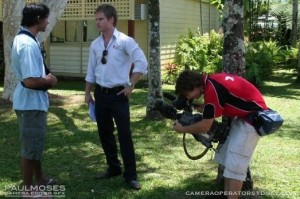 Shooting for Channel 7 in Cairns

I have worked for broadcasters, corporate companies and agencies all over the world, for clients including BBC, Channel 10, Channel 7, Fox Sports and Fuel TV, EasyJet, Guiness, BMW and Cunard. My career started with a 2 year full-time course in Interactive Multimedia & TV/Screen Studies at Media Arts Production skills in South Australia.

Having demonstrated a natural flair & a strong enthusiasm for camera operation, I was offered a full-time role as ENG Camera Operator for Channel 7 Australia upon graduating from film school. This role, working in regional Cairns, QLD gave me a steady grounding in broadcast standards and techniques, and further helped to develop my confidence with camera operation and editing.

My next role was at WIN TV in Wollongong NSW, an hour south of Sydney. This opportunity allowed me to work in a regional TV setting, as well as exposing me to metro news gathering for bigger, national stories. This role also gave me the opportunity to build my skills on a non-linear editing system. 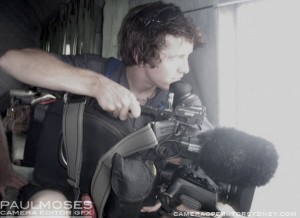 After 1 year in Wollongong, I was offered a role in my home-town of Adelaide with Channel 10. As an ENG Camera Operator for the nightly news and sport service. I was working in a medium-sized newsroom, shooting live News & Sport, capturing various high profile events & stories across the state.

In 2010, with a desire to develop my production skills in editing & graphics, I accepted a short contract to work as a camera operator/ editor for the snow season. This meant that I was working as a live TV cameraman & Editor for all the high profile networks, including Fox Sports, Fuel TV, Channel 9, Weather Channel & Sky News. Here I was given the opportunity to build on my After Effects & Graphics skills, with head office giving me Creative Lead on all stories sent out of the onsite production office.

The next exciting adventure was with an internationally-recognised studio based in Waterloo, London. Within days of finishing my contract in the Snowy Mountains of New South Wales, I was on a plane to take up my new role.

Once in the UK, I was thrown into the mix in a senior production role, responsibilities included D.O.P, directing and editing an array of content – from destination feature stories in Spain for the Travel Channel, hotel commercials in the Italian Alps, and high-profile web content for clients including BMW & Easyjet. 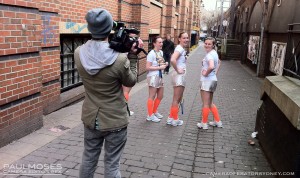 Filming for Easyjet in Northern England

Towards the end of 2011, I filmed, produced & directed my own travel documentary, Sidetracked, which follows a group of six adventurers on a journey from London to the Pyramids of Giza by bicycle. Whilst the film is still in post-production, this cemented my passion for story-telling and allowed me to develop my skills as a Creative Lead & Director.

Throughout 2012, I worked on a range of projects as a Freelancer in London and through Europe for clients including Waterloo Film Studios, Lonely Leap Documentaries, BBC Breakfast and BBC Arabic. The highlight of this was filming the build up and coverage of the 2012 Olympic games for Channel 10 Australia and BMW Europe.

I left London towards the end of 2012 and found my place all the way down here in Sydney! Since arriving in November 2012 and launching this website, I have been busy establishing contacts & clients within the Sydney media industry. Throughout 2013 and 2014 every week work seemed to get busier with exciting projects coming through the door

In 2013 worked on a large range of projects including Channel 10’s ‘The Biggest Loser’ (3 days per week for 12 weeks), Rock for Recognition,  Warratah rugby player profiles, Dutch Television, Automotive TVC’s, NDR (Germany’s largest Broadcaster), The Athletes Foot & Adidas and the second part of a British Charity TVC – the first part was filmed at Waterloo Film Studios where I used to work in London – it’s a small world and an even smaller industry!

2015 is shaping up to be an exciting year with many more exciting projects coming in, if you have a project you would like to chat through then don’t hesitate to get in contact here